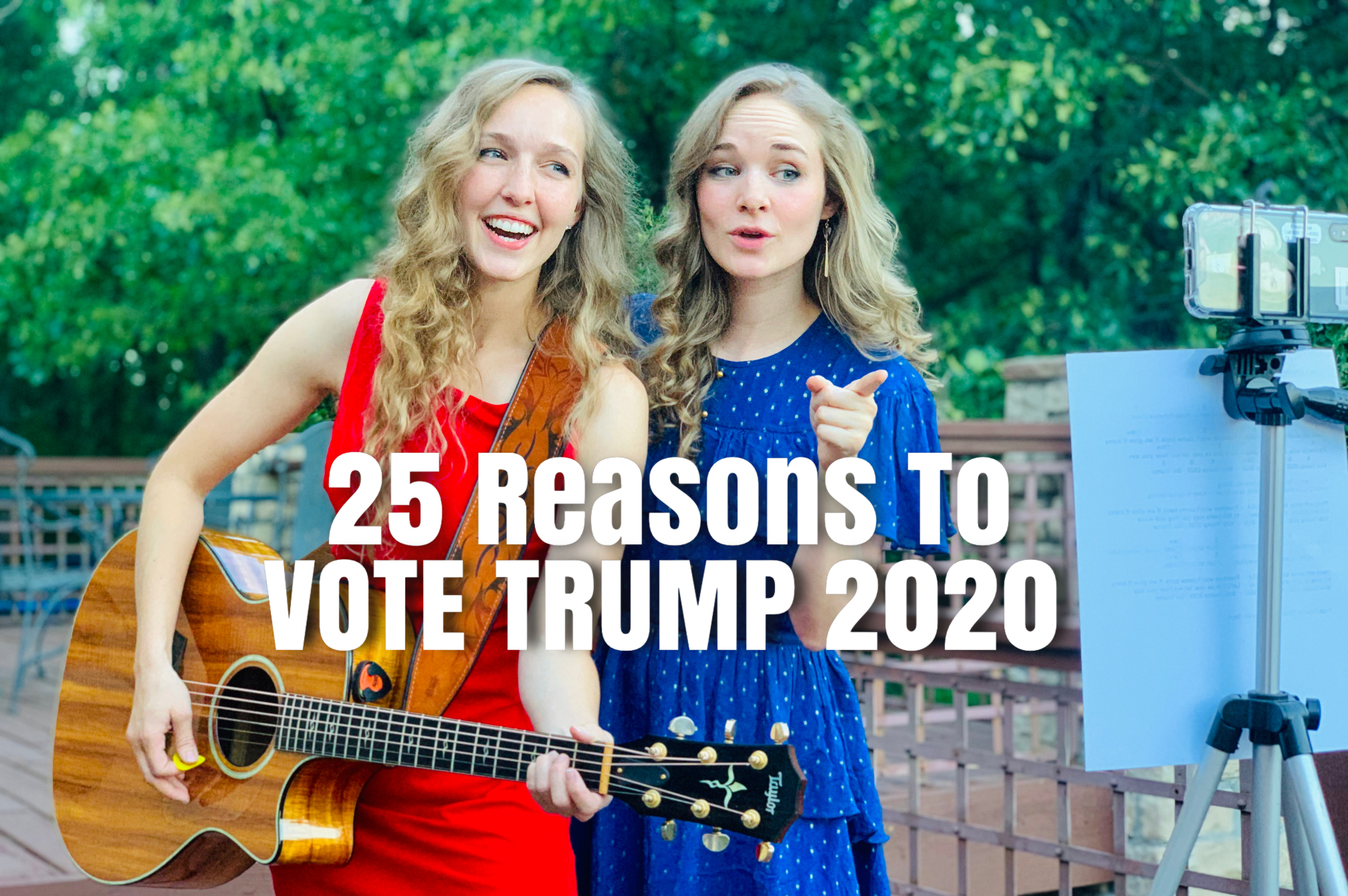 Hey, we’re Camille & Haley Harris, singers, songwriter, sisters and writers of the viraling song “Keep America Great” for President Trump! A live version of our song recored outside of the BOK Center in Tulsa, OKlahoma hit twitter and shot up to 29 millions views within a week. Now between that video, other live versions of our song, remakes, parodies, Tiktoks, instagram reposts, facebook reposts, song reactions, news coverage, and our official music video, the song has reached multiple millions of views around the world since June 11th, 2020. Crazy!

With that kind of exposure many friends, fans and wondering parties have asked why we support President Trump enough to put our names, reputations, and music career potentially on the line to endorse him so fully. Some pose the argument that a Christian should not vote for him and we ardently disagree.

After years of watching his strength and leadership, his ability to negotiate with world leaders, after doing hours upon hours of researching the achievements, values, work and plans of him and his administration, and after seeing the Christian conservatives he surrounds himself with and endorses, after seeing his defense and support of the church and religious freedom, we believe every Christian and conservative in America can unregrettably give him their vote of approval and public support now and on November 3rd.

Standing against Trump in this election, or choosing to not vote for anyone, over an opinion gained by the media’s demonization of him or because of offense gained over his bold responses to corruption and anarchy, is a vote against American freedom at this point. There is no other option for a Pro-Life, Christian conservative who loves America and opposes the socialist and communist agenda for our country in this election. This is bigger than re-electing President Trump for us. This is about standing against corruption, saving a country that is being targeted for takeover, and speaking up while we still have the freedom to do so.

We are proud to stand with President Trump for many reasons, and we learn more all the time as he and his cabinet continue on their quest for America’s improvement and longevity, but here are 25 notable reasons to begin with:

(note: these are not listed in order of importance.)

I have many hours of research into the policies of our great President. I encourage you to search deeper into these topics for your own understanding of the benefits they bring to every American. – Camille

Do not be bullied into silence. The Silent Majority is truly rising up and we are thankful to be a part of the conglomerate effort of passionate patriots who are working to save American freedom.

P.s. Join us Thursdays as we fast and pray for our nation and for God’s will in each of our lives.

To hear or buy our original music, visit our “BandCamp”:

Hi, we’re Camille & Haley & by now you probably know that we’re singers, songwriters & sisters. We come from a Christian family with 8 kids & have been singing together for 9 years! Find us on social media & please let us know if we’ve impacted your life in some way! Also if you want to support us by getting any of our 5 albums and singles on Bandcamp, it really helps us to able to invest more time making music and videos! God Bless you & thank you for taking interest in our music and lives. :)